FOUR PAWS Ukraine was given the Regional Charity 2019 Award for its Animal Assisted Interventions (AAI) project with former stray dogs that has put animal welfare and human well-being together. This annual award is given in various nominations to individuals and organizations who made a valuable charitable contribution to the local community. Each year, 18 entities are recognized for their activities that improve life in the community and promote common social responsibility.

In 2019, FOUR PAWS Ukraine conducted Animal Assisted Interventions with former stray dogs Lisa and Busia, who were rescued from the streets, adopted, trained and involved in therapeutic interactions with humans. Lisa and Busia were engaged in Animal Assisted Activities, Animal Assisted Education, and Animal Assisted Therapy with various target groups, such as local rehabilitation centers for people with functional difficulties, people with developmental issues, and in elderly homes. These two lovely therapy dogs have been demonstrating eagerness and high interest in AAI, as it is always fun for them to play during the sessions and receive treats, and enjoy their new life as pets with their owners Natalia and Tetiana.

Back in 2018, FOUR PAWS launched an AAI project in Ukraine with intention to integrate the positive experience of AAI with former stray dogs in Romania and Bulgaria. In fact, AAI was a completely new approach towards human services, especially with former stray dogs since around the world most professionals and beginners in this field involve only pure breed dogs. It was a challenging time, as a team had to be formed and trained in Ukraine to provide high-quality AAI alongside world standards on animal welfare in AAI.

The first member of the team was a local counseling psychologist, Ian Petinov, whose task was to find dog handlers for the project as well as to select, rescue, train, test and engage stray dogs for AAI in Ukraine. Being a member of the International Association of Human-Animal Interaction Organizations (IAHAIO), and having tremendous experience in managing animal welfare in AAI, FOUR PAWS managed to implement high standards of AAI in Ukraine and launch the project successfully.

The first human-animal team joining the project was former stray dog Lisa and her handler Tetiana, a pediatrician and animal welfare person. Lisa was found by Ian under a tram stop bench in the city of Vinnytsia, and he decided to bring her to the local shelter for behavioral supervision before she could be adopted and join the project. For two weeks, Lisa was being supervised to assess her health and behavior, but every day, Ian and Tetiana visited her to pet and play with her and take her for a walk. Lisa was finally ready to be adopted by Tetiana in September that same year. It took her four months to adjust to her new life from stray to pet in a loving and caring family. After one year of continuous positive trainings, Lisa was ready for her first AAI session and continued to be the team’s companion in human-animal interactions supporting many people in need.

The second human-animal team that joined the project was former stray dog Busia and Natalia, an athletics coach and animal lover. In February 2019, the AAI team traveled all the way from Vinnytsia to the city of Lviv to adopt Busia after she was recommended by an animal behaviorist and partner of our project. Busia was rescued from the streets by local animal welfare activists and brought to the behaviorist for training. From the very beginning, the team felt that they had found their new AAI dog. Natalia adopted Busia shortly after and they soon created a strong human-animal bond, which is crucial for work in AAI. Already in the summer of 2019, Busia successfully supported her first groups in AAI sessions.

Helping them helps us

Today, we are happy to witness how our project has changed the lives of the rescued and adopted dogs, as well as the lives of many people involved in AAI. Lisa and Busia have become true companions for their handlers and they enjoy every single day working together, as well in leisure time and relaxing moments at home.

We are honored and proud to receive this award as a symbol of recognition of our work and as a message to the local and international community that stray animals should be respected and can be adopted to have better lives and enjoy having human-animal bonds in caring families. We will continue our work in AAI with former stray dogs, motivating even more human-animal service professionals to rescue, adopt, and train stray dogs for AAI, and promote stray animal adoptions by caring families, so that more animals can enjoy high-quality lives, have a home, and be respected by communities.

Alongside the AAI project, FOUR PAWS runs Stray Animal Care (SAC) projects and a Shelter Adoption Program (SAP) pilot project in Ukraine to enhance the welfare of stray animals across the country, create awareness about the stray animal overpopulation problem, promote responsible pet ownership, and increase adoptions. In all these projects, we work very closely with the local municipalities and community members to address stray animal population in a humane, sustainable, and effective way. Together, these projects create a unified approach to increase stray animal welfare in Ukraine by demonstrating that stray animals deserve humane treatment, as well as to be adopted to become a companion, a life-long friend and a pet. 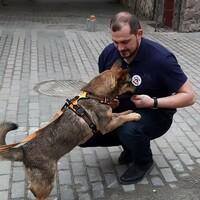 Head of AAI Ukraine and Psychologist

Ian currently manages the FOUR PAWS AAI project with former stray dogs in Vinnytsia, Ukraine. The programme’s primary focus is on changing attitudes and behaviours towards stray dogs, by showing to the public stray dogs’ ability to be socialised and trained to create strong human-animal bonds. Demonstrated through emotionally therapeutic interactions between humans and dogs, Ian’s focus in AAI is on delivering the highest level of human and animal welfare standards and creating a strong AAI network in Ukraine. Together with his team, he also provides public awareness activities promoting animal welfare, responsible pet ownership, reward-based training approaches and adoption of stray dogs.