As rising temperatures and the number of heat waves have increased across the globe, it’s more important than ever to prioritize your pet’s safety. Here are ways to keep your pet safe and ensure you're providing the best care possible for your four- legged friend!

Here in the U.S., the summer months are quickly approaching and with the change in seasons, a change in temperature.

Heat waves are once again predicted to cause catastrophic problems across the United States this year. Insight from NASA shares heat waves – periods of abnormally hot weather than can last days to weeks – are projected to become even more intense due to climate change.

Countries around the world including Australia, which suffered its hottest month on record this past January (their summer), have already been affected by extreme heat.

Temperatures were recorded over 118 degrees Fahrenheit and the Australia's State Emergency Service declared the heat wave a threat to public safety. Air-conditioner use taxed the electrical grid and forced companies to cut power from other communities.

It wasn’t just the people that bore the burden of the heat waves.

Entire herds of feral horses were found to have collected near dried up watering holes and perished. Some reports say that over a third of the spectacled flying foxes (Australia’s type of bats) died as a result of the heat. And for now, there is no predicted end in sight for these weather anomalies.

The Danger of Heat Waves

According to the Atlantic Oceanographic and Meteorological Laboratory, heat waves are, and have been, the leading cause of weather related deaths in the U.S. for the past 30 years. The Intergovernmental Panel on Climate Change (IPCC), which includes more than 1,300 scientists from the United States and other countries, forecasts a temperature rise of 2.5 to 10 degrees Fahrenheit over the next century.

What does this increase in temperature tell us? Extreme weather conditions will become more regular and with warmer temperatures, more devastating consequences will result.

It’s now more important than ever to prioritize the safety of ourselves and our pets.

How Does the Heat Affect Your Pet?

Pets have evolved to thermo-regulate effectively with their fur intact. Their fur coat that keeps cold from penetrating the skin also keeps the heat out. A well-groomed, thick-coated, dog will lose their dense under-fur for summer as nature intended.

But there are, however, circumstances where it might be good to give your pet a haircut.

A matted coat does not allow air to circulate and pets who are prone to moist skin infections, or hotspots, might benefit from a shorter haircut. If your pet spends a lot of time outdoors, it will increase their risk of sunburn. It’s important to always consult your vet to determine if your pet can benefit from a summer cut.

It’s also worth mentioning that pets do not sweat like people do.

Dogs and cats can only lose excess body heat by panting or drinking water. A small amount of heat can be lost through an animal’s footpads, but only if they are exposed to cool air or a cool surface. Because your pet walks on four limbs, this places them closer to the source of heat, especially when walking on cement or asphalt surfaces. In direct sunlight, asphalt can reach temperatures of 158ºF and cement can reach temperatures of 145ºF. Be wary and try your best to help your pet avoid heat related burns.

What Can You Do?

During times of extreme heat, there are five key considerations every pet owner must consider to ensure the welfare of their beloved pet. Here’s what to do and what not to do when a heat wave hits:

1.)     Don’t take your pets in the car. Car temperatures rise as much as 50ºF in as little as an hour. Simply opening the car window slightly does NOT help prevent this temperature rise. Dogs cannot sweat to cool down and when trapped in the car, they’re forced to endure grueling conditions.

2.)     Don’t wet your pet completely to cool them down. This is especially true if your pet is already hot or a thick-coated breed. Wetting your pet traps the heat against their body and will increase the chance of them developing moist skin infections. Instead, to help them cool off, provide a damp towel they can rest on to cool their belly and feet. If possible, let them wade or lay in a shallow children’s pool.

3.)     Carefully plan walks. Schedule walks and other outdoor exercise for early in the morning or later in the evening when it’s cooler. Walk your pet in shady or grassy areas where there will be less heat from the pavement. Do not take your pet for a long walk after they have been bathing or swimming. Water softens the footpads, making them more prone to burning, especially when walked on hot pavement. The increased exercise while wet can also cause their temperature to rise and cause heat to become trapped against their body.

4.)     Try to keep your pet indoors. Plan to keep your pet indoors where it’s usually cooler as temperatures rise. If possible, create different temperature zones around the house for your pet to go where they are most comfortable throughout the day. This can be done using air conditioning units and fans. Like us, different animals prefer different temperatures. And when your pets do go outside, make sure they have plenty of shade at all times; the sun moves throughout the day, so it’s important that pets have a shady place of retreat to escape from the sun and heat.

5.)     Always make sure your pet has plenty of clean water. In addition to cooler water, you can also provide ice cubes for your animal to chew on or lick.

Know the Symptoms of Heat Stroke

Being prepared and keeping a close eye on your beloved animal is your pet’s best protection against extreme heat. If your pet is excessively panting and seems restless, these may be early warning signs of overheating. This behavior can rapidly progress to heat stroke so it’s important to get your pet to a cool place and provide cool, not cold, water. 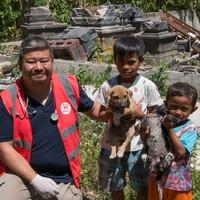 Dr. Zee has worked for many conservation and animal welfare organizations. He has over 20 years of experience in non-profit management and providing support and expertise for hands-on work with animals. Dr. Zee responded to disaster relief efforts in Iraq, Indonesia, Philippines, China, Japan, Thailand, India, the Caribbean, Australia, and the USA.

As the Director of the Disaster Relief Unit, Dr. Zee assists communities with animals affected by disasters. His expertise and background has allowed him to serve on the International Union for the Conservation of Nature’s (IUCN) Species Survival Commission Bear Specialist Group (SSC-BSG), work with the United Nation’s Office of Disaster Risk Reduction and assist the World Animal Health Organization on the steering and working groups as a technical expert. Dr. Zee has also served on other scientific think tanks pertaining to sustainable development, animal welfare and conservation.

He is currently affiliated with universities in the USA and China.