August  12, 2020 – While the trade and consumption of dog meat in Asia is increasingly being discussed in public, the equally brutal cat meat trade is still relatively unknown. Global animal welfare organizations FOUR PAWS and Change For Animals Foundation have now released the findings from their investigations into the country’s illicit cat meat trade, exposing the true extent of the hidden trade. In Vietnam alone, an estimated one million cats every year – including strays and pets – are stolen from the streets and even from people’s homes, trafficked across the country and brutally slaughtered.

Locally known as "Little Tiger" and once only found in Northern provinces, the dish is spreading in popularity nationwide despite increasing pet ownership. The trade is not only a threat to animal welfare but also to human health with the risk of rabies and zoonotic diseases. FOUR PAWS and Change For Animals Foundation therefore calls on the Vietnamese government to  reinstate laws previously in place that explicitly prohibited the cat meat trade, and enforce and strengthen existing laws to safeguard human and animal health and protect people’s companion animals from theft.

In contrast to the local dog meat trade, the hunting, slaughtering and consumption of cats was explicitly illegal in Vietnam until January 2020. However, the law has been revoked and there is now more demand than ever for cat meat. This is particularly true in the north of the country, but its popularity is also spreading to other parts of Vietnam as far south as Ho Chi Minh City. The investigations by FOUR PAWS and Change For Animals Foundation identified Hanoi and the Thai Binh province as Vietnam's cat meat hotspots, with their large networks of hundreds of restaurants, holding areas and slaughterhouses. To meet the increasing demand, free roaming stray and pet cats are captured and sold alive to wholesalers or directly to restaurants for slaughtering. According to the organizations, there are no farms in Vietnam where cats are bred specifically for the meat trade.

“At the wholesalers, we discovered many cats with collars – a clear sign that they were pets. During our research we also met many pet owners who were desperately looking for their stolen cats. The authorities usually turn a blind eye to this because they are often involved in the cat meat trade, either profiting from bribes or are consumers themselves,”

Some restaurants purchase the animals directly from cat thieves and slaughter them themselves on their premises, but most operate with wholesalers and slaughterhouses. According to the investigations, the coastal towns of Da Nang and Hoi An in central Vietnam – popular amongst national and international tourists – are considered crucial for the sourcing and distribution of stolen cats. “In holding areas, the wholesalers keep the cats crammed into small cages for several days until they have collected enough animals to cover the costs of transport. Over hundreds of miles the cats are transported without water, food, and sufficient ventilation to the slaughterhouses scattered throughout Vietnam. Some wholesalers even use luggage compartments on regular passenger buses for the trafficking,” says Lola Webber, Co-Founder and Programs Director of Change For Animals Foundation.

In the slaughterhouses, the cats are usually drowned, provided they have not died from exhaustion, heat stroke, or injuries caused by their brutal capture and transportation. FOUR PAWS and Change For Animals Foundation have also documented that cats are sometimes bludgeoned to death with a hammer, boiled alive, or killed by electrocution. The fur is then stripped from the animals and the skin is burned. Only after that are the cats gutted and frozen for further transport.

The cat meat trade is a profitable business. The prices for cats and cat meat are based on weight, with live cats going for $6.50 per 2.2. lbs and their raw meat going for $8.50 per 2.2 lbs. According to the latest research by FOUR PAWS and Change For Animals Foundation, black cats are worth even more.

Traders can sell live black cats for $8.50 per 2.2 lbs. and their raw meat can be sold for up to $21.50 per 2.2 lbs. These prices could be attributable to younger generations now considering cat meat an exotic delicacy. For older people, consumption is usually linked to customs, superstition, and the lunar calendar. Some locals are convinced that eating cat meat repels bad luck. Others eat the meat – especially from black cats – because they believe it has healing effects, although there is no scientific evidence for this.

In recent years, cats have become popular pets in Vietnam despite the increasing demand for their meat. Ironically, the rise in pet ownership has simply supplied the cat meat trade with new victims since the demand for cats can no longer be met with capturing stray cats alone. Hence, cat thieves do not shy away from stealing pets. Violent clashes between cat thieves and pet owners have occurred frequently, some of which have also been known to end fatally.

The trade is not only a threat to animal welfare but also to human health with the threat of rabies (a particularly dangerous threat in Southeast Asia) and other diseases. According to FOUR PAWS and Change For Animals Foundation, the practices used in the cat meat trade could potentially lead to the outbreak of zoonotic diseases in the future, as seen with COVID-19, due to unsanitary conditions, brutal and unhygienic treatment of animals, multi-species transport, holding areas and slaughtering facilities, and cross border transportation and handling. Without any controls, many of the animals – whether healthy or sick – are transported across the entire country. The unsanitary conditions in holding areas and slaughterhouse facilities, often holding various species from numerous sources, facilitate the transmission of zoonotic diseases and provide the perfect breeding ground for the development of novel ones, with potentially catastrophic results.

FOUR PAWS’ fight against the cat and dog meat trade

In Vietnam, FOUR PAWS partners with Change For Animals Foundation, as well as local NGO’s Vietnam Cat Welfare in Hoi An and Paws for Compassion in Da Nang to improve companion animal welfare. To put a sustainable lasting end to the brutal cat and dog meat trade in Southeast Asia, FOUR PAWS has launched a campaign on an international and national level in Vietnam, Cambodia, and Indonesia.

“Through educational work and cooperation with the responsible authorities, local communities and the tourism industry, FOUR PAWS’ is calling upon Governments in Southeast Asia to introduce, strengthen and enforce animal protection laws, which will bring an end to the capture, slaughter and consumption of dogs and cats. This will not only protect animals – but also people as well from public health risks,” says Dr Karanvir Kukreja, Project Manager for FOUR PAWS’ Ending the Dog and Cat Meat Trade Campaign.

Furthermore, FOUR PAWS supports local animal welfare organizations and communities with humane and sustainable stray animal care programs. FOUR PAWS is also part of the animal welfare coalitions DMFI (Dog Meat Free Indonesia) and ACPA (Asia Canine Protection Alliance), which lobby against the trade in Southeast Asia, as well as the Asia for Animals Coalition, which works to improve the welfare of animals across the region.

The support for an end to this cruel trade has gained global traction with the FOUR PAWS petition receiving over 840,000 signatures  since it launched late last year!

To learn more about our campaign to end the Dog and Cat Meat Trade in Southeast Asia visit here.

FOUR PAWS is the global animal welfare organization for animals under direct human influence, which reveals suffering, rescues animals in need, and protects them. Founded in 1988 in Vienna by Heli Dungler and friends, the organization advocates for a world where humans treat animals with respect, empathy, and understanding. FOUR PAWS’ sustainable campaigns and projects focus on companion animals including stray dogs and cats, farm animals and wild animals – such as bears, big cats, and orangutans – kept in inappropriate conditions as well as in disaster and conflict zones. With offices in Australia, Austria, Belgium, Bulgaria, Germany, Kosovo, the Netherlands, Switzerland, South Africa, Thailand, Ukraine, the UK, the USA and Vietnam, as well as sanctuaries for rescued animals in eleven countries, FOUR PAWS provides rapid help and long-term solutions. www.four-paws.us 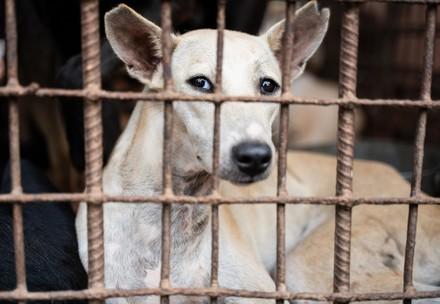 Thousands of dogs are spared a gruesome death by drowning, choking, and asphyxiation 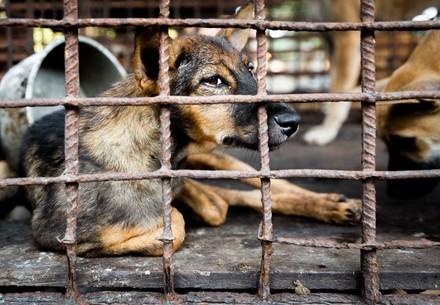 According to new FOUR PAWS report, trade continues to thrive despite severe risk to public health