Donate
FOUR PAWS in US Our StoriesRescuesRescue Damai

In early May, when the owner of a gas station noticed a moving sack tied to the back of a client's motorbike in Bengalon, Borneo, he knew something was not right. Inside the sack was a little orangutan orphan, scared and confused. The client explained that he was taking the little orangutan to leave in the rain forest, where for certain the young infant would have met a certain death.

With much compassion, the gas station owner convinced the client to hand the infant over to him, where he sought out the best solution for the orangutan's survival. The Indonesian Wildlife Authority BKSDA were able to intervene and contacted FOUR PAWS for assistance.

Since he was rescued 75 years to the day after the allied victory in WWII, when the little orangutan arrived at the ORANGUTAN FOREST SCHOOL the team named him Damai, meaning "peace" in Indonesian. The infant is just two years old and has already suffered from much trauma during his short life. Within his first few days at the ORANGUTAN FOREST SCHOOL, located in Samboja, East Kalimantan, he bonded quickly to his surrogate foster mother and the team have been very pleased to see him relax and settle in quickly at the Forest School. For the next 60 days, the orphan will remain in the Forest School quarantine, being closely monitored by the team and undergoing a series of health checks before being allowed to interact with the other 8 orphan orangutans at the school.

During times of COVID-19, the caregivers at the school are taking extra precautions to ensure that the orangutans are not put at risk of contracting the virus.

Since arriving at the ORANGUTAN FOREST SCHOOL, Damai has been on a high-nutrient and species-appropriate diet and has already gained weight. He loves his mealtimes and finding snacks in the forest—especially bamboo pith, pandanus pith and ficus fruits.   Damai enjoys venturing into the forest to climb trees and explore the undergrowth with his dedicated caregiver, Ipeh. Since Damai arrived at only two years old, he is already deeply bonded with Ipeh. Orangutans are usually dependent on their mothers until they are 6-8 years old, when they start to learn independent skills. He is now thriving with the guidance of his "surrogate mother" and will learn to develop the adult survival skills he needs.  Help us support him and other rescued animals by donating today! 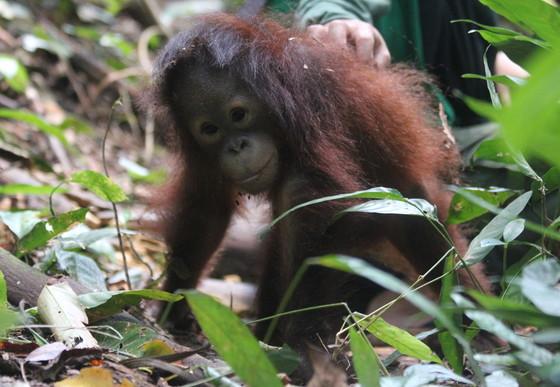 With the antibiotic treatment, Damai’s skin infection has dramatically improved and our specialist vets expect it to clear up in the next week. Despite this, he is in good health considering he was abandoned.  It is still some time before Damai will be introduced to the other orangutans. This is to ensure that he doesn't spread any diseases to the others. For now, we believe Damai feels safe and is enjoying his time in recovery. 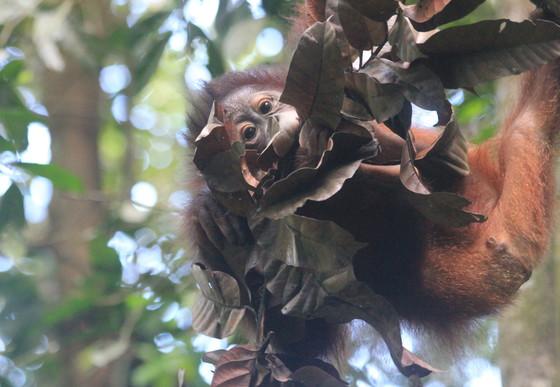 Since arriving at our ORANGUTAN FOREST SCHOOL, Damai has continued to gain strength every day! He is an active young boy and loves to explore the forest, under the close eye of his dedicated caregivers. Last week, the caregivers noticed some folliculitis on his ankle, an infection at the root of his hairs. The specialized wild animal vet is treating Damai daily with antibiotic balm, hoping that this infection doesn’t spread. Otherwise, he is a happy little ape, who loves to climb the trees. Damai will remain in quarantine for some time longer before he can be introduced to the other orangutans at the Forest School. 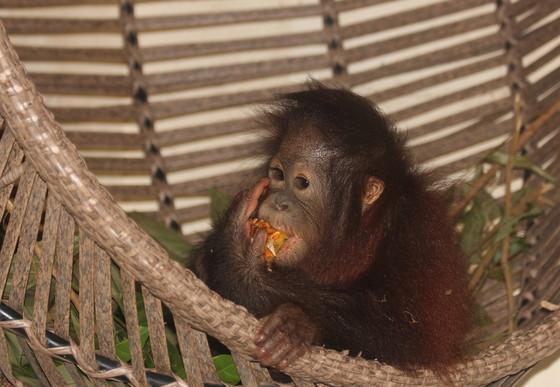 Damai is getting used to forest food but does not seem to like vegetables yet! The caregivers have already observed he has good climbing skills and is getting more confident every day.  Within the safety of the quarantine area at the Forest School, he can already climb quite high and gets a lot of enjoyment from this natural ability. He comes back down to his caregiver when he is hungry or thirsty, which is a good indicator that he's already quite trusting of the team.

Little orphan Damai has arrived at the ORANGUTAN FOREST SCHOOL, in Borneo