Donate
FOUR PAWS in US Campaigns & TopicsTopicsHelp for bearsProtecting U.S. bears from the bile trade

In line with our work to stop illegal bear bile farming in Vietnam, FOUR PAWS also seeks to protect wild bears in the U.S. from being killed for their gallbladders to supply the international bile trade.

Throughout Asia, thousands of bears are either bred and raised in captivity or poached from the wild to supply the demand for bear bile that is used in Traditional Medicine. These bears suffer in agony as bile from their gallbladders is extracted. The trade of wildlife and their parts for Traditional Medicine is an unnecessarily cruel practice that also poses a huge risk to global health. In addition, studies have shown that over 80% of Traditional Medicine consumers would consider herbal or synthetic alternatives to wild animal products.

Wild bear populations in Asia have dwindled significantly as bears are taken from their habitats. Now, poachers are targeting bears in the U.S. to meet the demand for bear gallbladders. A single gallbladder can easily exceed $1,000, even bringing thousands of dollars, which motivates commercial killing on a scale that causes immense cruelty and threatens bear populations.

The gallbladders are sold in Chinese medicine shops in the U.S. and exported to meet the demand for gallbladders overseas. While 40 states have laws on the books to address this trade, the laws vary widely by state. For example, a trafficker in Colorado may face up to three years in prison and a $100,000 fine, while a trafficker in Kentucky may receive only a $100 fine.

Due to the insufficient patchwork of state laws, a federal law is needed to protect wild bears throughout America. This is why FOUR PAWS and Animal Wellness Action support the Bear Protection Act (H.R. 2264),which would stop the killing of bears in the U.S. for their gallbladders and internal organs.

Introduced into Congress by U.S. Representatives Ted Lieu, Rodney Davis, Glenn Thompson, and Ann Kuster, the Bear Protection Act would address the poaching of American bears for their gallbladders and end the U.S.’s role in this wildlife trafficking enterprise.

What Can You Do?

If your legislator is already a cosponsor, please still contact them by email and thank them for their support of this crucial bill. Current list of cosponsors available here.

2. Show your support on social! Here is a sample social media post:

Similar to the plight of big cats in America, there are insufficient state and federal laws that protect wild bears. This is why I support the passage of the Bear Protection Act (H.R. 2264),  which would stop the killing of bears in the U.S. for their gallbladders and internal organs. 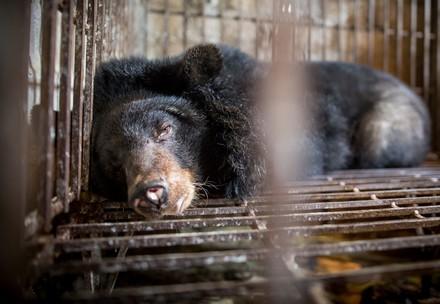