In the first two months after the project started, FOUR PAWS vaccinated 58,386 animals in 515 villages against rabies, one of the deadliest diseases in Myanmar.

A team of 40 people, including local and international veterinarians and partner organizations, made the pilot project of the mission successful.

The heartbreaking reality behind the rabies epidemic in Myanmar

Almost 300,000 animals vaccinated! FOUR PAWS worked very closely with the Livestock Breeding and Veterinary department and local and international stakeholders in the development of the first National Plan on Rabies Elimination, which was adopted by the Ministry of Agriculture, Livestock and Irrigation.

The teams hard work is really paying off, and now we can share our great achievement. The grand total from the beginning of the program since June 2019 reached 100,082 animals vaccinated!

In view of World Rabies Day on September 28th, FOUR PAWS is supporting Myanmar's plans to completely eradicate rabies by 2030.

The fight against rabies is a long-term one

Myanmar achieved a first important milestone in support of the WHO’s worldwide goal of stopping the transmission of rabies from dogs to humans by adopting its first National Plan on Rabies Elimination in Dogs. The successful implementation of the plan will require a long-term commitment from all stakeholders to achieve Myanmar’s goal of eradicating rabies once and for all by 2030.

According to the Livestock Breeding and Veterinary Department, an estimated four million dogs live in the country. Due to this large population, FOUR PAWS believes it's equally important to vaccinate, educate the public, and raise awareness about rabies: killing the infected animals is inhumane and not a long-term solution. 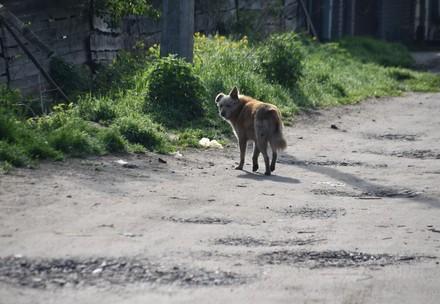 Where do we work?